WebSockets is essentially a transport layer built on the top of the TCP/IP Protocol. and provides a persistent bidirectional communication channel between a client and a server.
The initial connection is established similar to a normal HTTP request and then upgraded to a lightweight and real-time bidirectional channel which allows the server to send downstream messages to the connected clients. 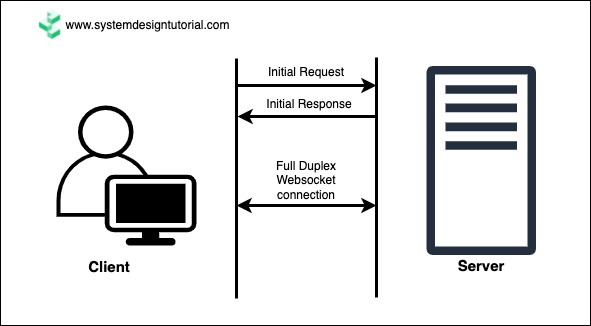 WebSockets allow exchanging messages using any protocol as long as both client and server agree on the same for example JSON, XML, and any more.

Before the WebSockets, achieving the same functionalities would require constant polling the server which is generally high latency and overloads the backend servers.

Websockets are used in a myraid of applications which demands low latency, realtime connection for exchanging data between client and server.

There are a plenty of popular WebSocket implemenations/libs available in the most popular languages, which makes it easy to get up and running easily.

In this Article, we will learn "How to Design a Cloud Storage Service". This will help you understand how such services work behind the scenes and help you answer system design questions like "How to Design Google Drive", "How to Design Dropbox" or "

Twitter is one of the largest social networks where users can post and read tweets ( short text messages with 140 character limit) along with photos and video support. Users of the Twitter service can also follow their family, friends, or celebrities to get the latest updates about them. In Twitter,